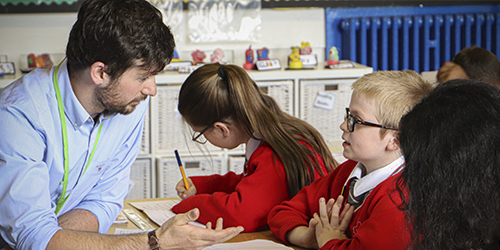 Primary teaching is one of the most popular teacher training courses, and as a result, competition for training places can be fierce. We spoke to our Primary Lead Seamus Gibbons and primary trainee Alice to find out more.

“When you decide to train to teach through a SCITT, you have two different options – salaried and non-salaried,” says Seamus. “The demands for both options are quite different. If you apply for the salaried route, it is more demanding and incredibly competitive. That’s because the school is investing in you, and you don’t have to pay the tuition fees. As a result, you’ll be teaching much more and earlier in the first term than on the non-salaried route – up to 80% of a full timetable. In order to qualify for that salaried position, we’ll be asking ourselves, ‘Is this someone we could put in the classroom 4 days a week?’

“On the other hand, you can opt for the non-salaried route, and this is a gentler way into teaching. You’ll start off with 30% of a full timetable, spending more time observing and with small groups. You’ll eventually build up to a fuller timetable, but it’s more of a gradual approach. Both options suit different kinds of people, so it just depends what you’re looking for.”

Alice is one of our salaried primary trainees. “Initially it seems a little bit nerve-wracking to teach all the different subjects, but I haven’t had to do all of them just yet. The support’s been really great. In my first week, I did struggle to get the class’ attention, but when that happens, another teacher or whoever you’re with will always jump in to help you along.”

“You don’t have to have lots of experience in a primary school,” says Seamus. “What we really look for is lots of transferable skills. We want to see that you’ve got the ability to break things down into small steps, and that you’ve got the presence to command a classroom. We’re also looking for empathy – the ability to really understand a class of 30 5-year-olds, for example.”

Alice has opted to study for her PGCE during her training year, along with the majority of United Teaching trainees. “There are two assignments – one is due in January, and the other is due at the end of March, so they’re quite well spread out. I’m doing my first assignment on behaviour, because that’s the thing I’m most focused on improving.”

According to Seamus, examining your motivation for teaching is key. “You have to be doing it because you’ve got a love for education,” says Seamus. “Most of our schools serve a deprived community. You have to have high expectations of children – you can’t come in with presumptions that children can or cannot do things, but instead you need to think about how you’re going to get children there. You need to be confident, but you also need to understand that you don’t know everything!”

Any final tips before applying?

Seamus says, “Start familiarising yourself with resources such as Oak National Academy, where you can view lessons for free.”

“If you’re applying on UCAS, get your references in early!” says Alice.

“It’s absolutely the greatest profession in the world,” says Seamus, “without a shadow of a doubt. Your reasons for going into the profession have to be from the heart – yes, it’s hard work, but it’s incredibly rewarding.”

Got a question about teacher training? Submit a question to the team and we could answer it on our blog!

Freedom of Information and Financial Accountability