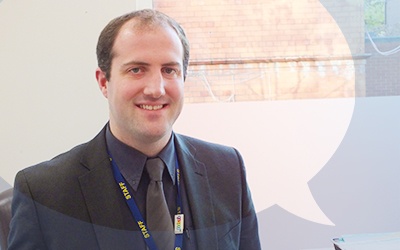 We caught up with Martin Oldfield, Director of Curriculum at William Hulme’s Grammar School in Manchester, to learn how his career progressed from trainee to senior leader.

I have been teaching for almost 11 years now, all of which have been at William Hulme’s Grammar School, where I now hold the role of Director of Curriculum.

A career in education is something that never really occurred to me until I accepted a Student Associate Scheme placement in the final year of my degree. This essentially involved me fitting in five weeks of experience at a school in Tameside around my university commitments. It was during this placement that I discovered my passion for teaching and the enjoyment of seeing the many achievements of the pupils in my groups.

During my time at WHGS I have developed a range of experiences in roles such as Deputy House Master during my NQT year, before embarking on a career within the academic roles at the school. Initially I was appointed as Head of Chemistry around Easter of my second year of teaching, before a promotion to Head of Science two years later. In my five years as Head of Science I developed my experiences of whole-school leadership, including a placement on the SLT, before my appointment as Director of Teaching and Learning in 2016. Due to a staffing change I took on the role of Director of Curriculum in January 2017, and I am now responsible for staffing and timetabling across the secondary and sixth form phases of the school.

Looking forwards, I am looking to continue developing as an effective senior leader whilst ensuring the pupils in our care have the very best opportunities to succeed in what they do. The next logical progression for me is to a vice principal role within United Learning, where I can continue to have an impact on the whole school curriculum and outcomes for pupils.

Got a question about teacher training? Submit a question to the team and we could answer it on our blog!

Freedom of Information and Financial Accountability